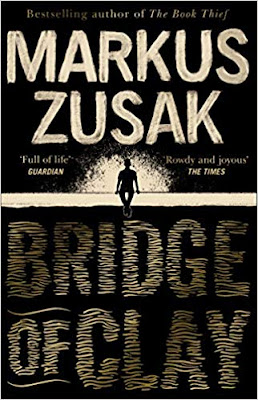 "A warm, captivating book about family, forgiveness and a lot of horse-racing." 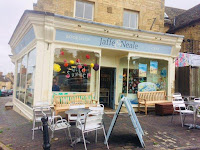 Jaffé and Neale is an award-winning independent bookshop and café located in Chipping Norton in the heart of the Cotswolds, and in nearby Stow-on-the-Wold. We serve delicious, homemade cake and excellent coffee and we are fortunate to have a dedicated team who are all as passionate about books, and about Jaffé and Neale, as we are. There is nothing more exciting to us than talking to a customer about what to read next.


It is September, the nights are closing in and we are having our last gasp of summer before the temperature takes a plummet downwards; this is the time that you need a really good book to look forward to – one that will draw you in and keep you engaged during those long dark evenings.

Bridge of Clay is Markus Zusak’s first novel since the hugely popular, bestselling The Book Thief. The prospect of following up a book so widely loved led to a pretty serious case of writer’s block, something Zusak has talked about very candidly since the release of Bridge of Clay.

It is the story of the Dunbar brothers; five boys whose mother has died and whose father vanished, leaving them to essentially raise themselves in a Sydney suburb alongside a menagerie of fantastically named animals, including a donkey called Achilles.

One day their father reappears and asks the brothers to help him build a bridge over the river next to which he is now living. Clay is the only one who agrees to help him; the resentment the other brothers feel towards their father hinted at by what they call him: ‘the Murderer.’

The eldest brother, Matthew, is our narrator and the story is told in a patchwork fashion, jumping back and forth in time to tell the story of the brothers, their parents and, eventually, the building of the titular bridge. A recurring feature of this novel is the way names, objects and even lines of dialogue are imbued with meaning that often remains unclear until later in the book. Zusak does this again and again; a typewriter, a book about Michelangelo, a character being referred to as ‘the Mistake Maker’, all keep appearing throughout the story, each time gaining a new significance for the reader until the end, when the whole story is revealed with something like the gut-punch that readers of The Book Thief will be familiar with. You may not believe that a clothes peg can make you cry but believe me; this book will make that happen.

This disjointed structure does mean that you must be patient while reading; certain events or character references will not make sense initially, and the jumping backwards and forwards in time means that occasionally the story can seem confusing. You have to trust that the meaning will become apparent by the end and frequently it does; there are chapters towards the end of the book which are incredibly moving. I am looking forward to re-reading it, as the complicated structure means that I think reading it for a second time will be a completely different experience.

This is a book which requires patience and time, but if you persevere with it, you will be rewarded with a warm, captivating book about family, forgiveness and a lot of horse-racing. If you are looking for something to enthrall you now that the nights are closing in, I couldn’t recommend this enough.

Bridge of Clay is published by Black Swan.