Guest review by Ann Turnbull: A STATE OF FREEDOM by Neel Mukherjee 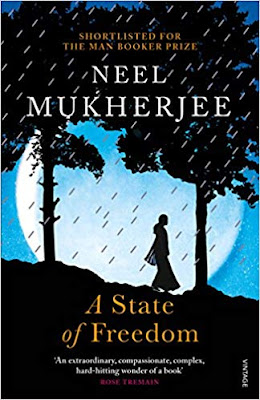 Ann Turnbull has been writing stories for young people of all ages since 1974. Her most recent book is In That Time of Secrets, a Young Adult novel about the persecution of Catholics in 1605, set in the Black Country. Find out more at www.annturnbull.com

I was immediately drawn into this story by the beauty of the writing and by the dreamlike events of the first chapter, in which an American man of Indian birth and his young son wander, sightseeing, in the ruins of an ancient palace. They are tired. It’s been a long day, and they’ve been delayed by an accident: the death of a workman who has fallen from scaffolding. They encounter the unsettling presence of a man who may be a spirit, a ghost, or a warning.

The remaining chapters follow the interwoven stories of several people: a young man from London visiting his parents in Mumbai; two determined women - Renu, a cook, and Milly, a cleaner – both of them seeking freedom from poverty; Soni, whose anger and despair drive her to join a guerrilla group; Lakshman, a desperately poor man who trains a bear cub to dance and tries to earn a living from it; and his twin brother Ramlal who leaves home to find work as a labourer in the city.

The story takes you to the heart of their struggles. Soni’s father, having borrowed money at high interest and travelled miles with his desperately ill wife, finds himself lost and defeated in the overcrowded hospital as he is sent upstairs and down, and up again, only to be brushed aside without help once more: “Soni’s father turned away, came outside and sat down on the steps. Against his will, his mouth twisted, like a child’s; he couldn’t make it hold its shape; he failed to make his crying resemble a dignified adult’s.”

The young man from London sums up his work, “My design job in London was flexible. I worked for a progressive, thinking-outside-the-box class of trendy outfit …” This is about as far removed from the lives of the other people in the novel as one could get, and he is uncomfortably aware of the very different lives of his parents’ servants, Renu and Milly, who live in the nearby slum and work shifts at several houses. Their earnings are not for themselves, but for the better future they are determined to win for their dependents.

Milly escapes to a kind of freedom, while her friend Soni’s family is left in despair. But all the people in this story had hope at first. Once, “on a golden afternoon when the boys were eight or nine”, Lakshman’s brother Ramlal had shown him how to see the face of Shiva in the mountainous landscape near their home: “Of course, Lakshman could see – he could see the god’s beautiful, lotus-like eyes, more closed than open, and the mouth, almost smiling … there he was, the great god Shiva, his face imprinted on Nanda Devi, his abode. And there he, Lakshman, was, gazing on it, a wonder revealed to a boy, and all the air, all the light and all the days were his to do what he wanted.”

These stories combine to give a deep insight into the lives of the poor in India. I’d recommend reading the book twice. On a second reading you make the connections more easily, and the writing is so beautiful, varied and engaging that it’s a joy to re-read, to experience aspects of the story falling into place, and to admire the intricacy of its construction.

A State of Freedom is published by Vintage.
Posted by Linda Newbery at 00:00