Guest review by Bridget Collins: THE MIST IN THE MIRROR by Susan Hill 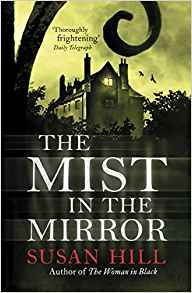 "Intriguing and complex, a subtle reworking of a well-known formula." 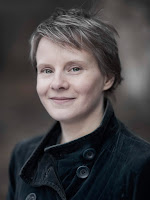 Bridget Collins trained as an actor at the London Academy of Music and Dramatic Art after reading English at King's College, Cambridge. She is the author of seven acclaimed books for young adults and has had two plays produced, one at the Edinburgh Fringe Festival. She has just published her first adult novel, The Binding.

To readers of her best-selling The Woman in Black, Susan Hill’s The Mist in the Mirror appears to be exploring familiar territory. Like The Woman in Black, it is a ghost story, set in a vaguely Victorian world of urchins, moonlight and old libraries, in which an isolated narrator encounters strange noises and mysterious doors before finally coming face-to-face with evil itself. It has the same Dickensian resonance, the same rather lovely prose to describe skies and sounds and places. And, like The Woman in Black, it can be read as a straightforwardly spine-chilling yarn, a book not to linger over too late at night. But there is something frustrating and elusive about The Mist in the Mirror, a deeper current which refuses to grant the reader the simple pleasures of terror and resolution. When I first read it I was (like many other readers, apparently) irritated by the book’s recurring pattern of delay and anti-climax; now, coming back to it, it strikes me as intriguing and complex, a subtle reworking of a well-known formula.

James Monmouth is a traveller, orphaned at an early age, who has finally returned to London, intending to settle down and write a book about his hero, the explorer Conrad Vane. He has few, if any, memories of his life before his parents died; rootless and friendless, he is determined to make a new life in an England that is essentially a foreign country. But although he remembers nothing, he is dogged by sinister and unpredictable flashes of emotion that seem to allude to his childhood without illuminating it; he has a sense that his own past is waiting for him, just out of reach, behind a beaded curtain or a fog in the mirror … As he searches for traces of Conrad Vane – dissuaded again and again by people who refuse to elaborate on their warnings – he realises that his life and Vane’s are somehow intertwined. Slowly, following chance clues and dropped hints, he works his way towards the heart of the mystery, which is also his cursed family seat and its inhabitant, the last person who might be able to tell him who he is.

So far, so good. But what sets this book apart from the traditional ghost stories it mimics is that the promised revelations never come: it is all spooky build-up, all atmosphere and unease. Hill excels, of course, at the evocation of fear – the creeping dread of being pursued, the sheer horror of the world disobeying the laws of reality ... But as Monmouth is led onwards, the answers he seeks seem to withdraw ahead of him, keeping their distance. Characters repeatedly come close to an explanation, but shy away from anything clearer than heavy intimations that Monmouth is in danger; over and over again there are scenes that seem to offer at least a step towards greater understanding, only for them to fall short. Characters choose not to elaborate, or don’t remember, or die before they can speak plainly. The book’s final denouement is certainly dramatic and terrible: and yet there is a sense of something missing. We understand a little more of what has haunted him than we did, but not enough; his own memories remain beyond his grasp, lost forever. And most gallingly of all, Monmouth – and, accordingly, the reader – will never know why.

Let’s face it, this is infuriating. If we read The Mist in the Mirror as an uncomplicated ghost story, it disappoints. We’re accustomed to expect a final, neat, comprehensible climax, and there is something perverse – unfair, even – about Hill’s reluctance to provide it. And yet, on second reading, there is something evocative about the lack of closure. Ghost stories are always metaphorical, no matter how simple they appear at first glance: the genre itself engages with the awful power of the past, and its disconcerting habit of refusing to stay put. The dead are not dead; our memories are not merely memories. But The Mist in the Mirror goes a step further than this. Monmouth, in searching for himself, risks his own identity and gains nothing. Not only does the past hold a terrible sway over him, it is unknowable, locked away, capricious. To me, the book expands the metaphor of the ghost story into something richer, and reflects another aspect of our relationship to the past: we’re afraid of its potency, but we yearn for it. We know that sometimes it seems close enough to touch: but finally, heart-breakingly, it’s always on the other side of the glass.

The Mist in the Mirror is published by Vintage.
Posted by Linda Newbery at 00:00