Guest review by Miriam Halahmy - THE RELIVE BOX AND OTHER STORIES by T. C. Boyle 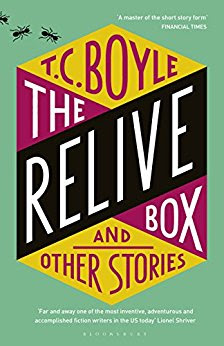 Miriam Halahmy writes novels for children and young adults. Her books have been published in the UK, America and other territories. Miriam’s books look at some of the most challenging issues of our time, dealing with immigration and asylum seekers currently and in the past, as well as homelessness, racism and family relationships. A new edition of her Carnegie nominated novel, Hidden  (Troika Books, 2018), has been adapted for the stage and will tour in the autumn. Her latest novel, Behind Closed Doors (Firefly Press, July) focuses on two fifteen year old girls on the verge of becoming homeless. Behind Closed Doors examines what it means to love and be loved, and how to make a life when there is no security at home. More on Miriam's website.

T.C. Boyle, an award winning American novelist and short story writer, is not widely known here in the UK. I was first introduced to his talents in a lengthy short story called Balto, set around a court case. A drunken father forces his twelve year old daughter to drive them home from school and she hits a cyclist. Will she lie for him under oath? Great dilemma!

This new collection, The Relive Box, shows off Boyle’s mastery of the form. As in poetry, not a word, a syllable or a line break are out of place. Each story is beautifully crafted with memorable phrases such as “the light making a cathedral of the street trees” and “dandruff like sleet in her hair.” Set now or in the near future, this is a prophetic, provoking, challenging and at times, downright scary collection; a call to arms, reflecting the current state of society and the rocky road we are heading down.

In the title story, every home has a Relive Box and Boyle shows us the terrifying potential of the digital age. The Box consumes every waking minute and most of the night. The children fight the adults for access and work has become an irritating distraction from the real purpose of life – time on the Relive Box. Read this story at your peril. It still lives with me weeks later.

Are We not Men?’ opens with a man’s arm being gripped in the locked down jaws of a deep red pitbull terrier. Have no fear; the animal (like many others in the story, including the ‘dogcat’) has been genetically modified. “She’s a Cherry Pit, germline immunity comes with the package,” says her owner, the eleven year old girl next door. Babies are equally modified, every nuance picked out in a catalogue for those who can pay. Height seems to be particularly valued for females. The child with the pitbull is six foot, two inches. How far will such modification go? In the street ‘crowparrots’ screech in the trees, commenting relentlessly; “Your mother…Up yours! ... f*** you.”

Other stories take current concerns and turn them on their head. In  She’s the Bomb terrorism is the focus but as a convenience tool. A student abrogates all responsibility for fellow human beings and invokes a fake terrorist scare twice for her own selfish purposes.


The Argentine Ant is a reflection on moving between cultures, a sting in the tail and the startling way creative thought can emerge from totally unexpected quarters.

We are drowning under a deluge of films, books, op eds, etc etc on the fate of humanity in the post-digital, post-genetic modification age. What if this has already happened? What will it look like? How will it affect us? Boyle considers these questions (almost with glee) and hits below the belt, sparing no feelings. Thoroughly recommended.

The Relive Box is published by Bloomsbury.