Guest review by Jane Harris: THE WIFE by Meg Wolitzer 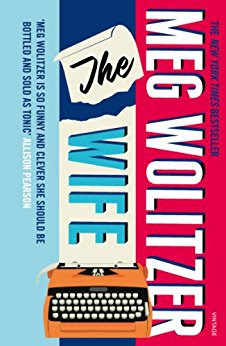 This was probably the most enjoyable book I read last year. It was my first Wolitzer novel - but it certainly won’t be the last.

The Wife is a provocative, satirical account of a marriage – more particularly, the flawed marriage between clever, diffident Joan Castleman and her narcissistic husband Joe, a successful writer. Joan helped Joe to become famous, sacrificing her own career for his. But there are secrets in this marriage. I was hooked from the first paragraph:

“The moment I decided to leave him, the moment I thought, enough, we were thirty-five thousand feet above the ocean, hurtling forward but giving the illusion of stillness and tranquility. Just like our marriage, I could have said, but why ruin everything right now? Here we were in first-class splendor, tentatively separated from anxiety; there was no turbulence and the sky was bright, and somewhere among us, possibly, sat an air marshal in dull traveler’s disguise, perhaps picking at a little dish of oily nuts or captivated by the zombie prose of the in-flight magazine. Drinks had already been served before take-off, and we were both frankly bombed, our mouths half-open, our heads tipped back. Women in uniform carried baskets up and down the aisles like a sexualized fleet of Red Riding Hoods.”

This opening encapsulates most of what I love about The Wife. Not just the powerful hook – she’s going to leave him – but the stunning prose; the wit and humour; the incisive observations of contemporary life.

Joan and Joe are flying to Helsinki, where Joe is to be awarded a prestigious literary prize. Over the course of the novel - while they are being feted in Finland in the run-up to the ceremony - Joan revisits their lives together. Back in the 50s, she was Joe’s creative-writing student; he was her (married) teacher. He left his first wife for her but it turns out that Joe is fundamentally insecure and self-absorbed, only interested in himself and his writing career. He neglected their children while they were growing up and Joan ended up devoting herself to him, losing her sense of self in the process. However, as we learn, Joan is entirely responsible for her own loss of identity.

There is a secret at the heart of this feminist parable which is revealed only towards the end. I won’t give anything away - although readers may guess the truth at some earlier stage, as I did. However, even if one does figure out what’s going on behind the scenes, this doesn’t really detract from the overall joy of this scintillating novel.

Writing this little review has made me hungry to read more of Wolitzer’s work, so I have just purchased The Ten Year Nap, her 2009 novel about stay-at-home mothers, which I’m now impatient to read. I do hope that this snapshot of The Wife will encourage readers of Writers Review to discover the brilliant Meg Wolitzer for themselves.

The Wife is published by Vintage.
Posted by Linda Newbery at 00:00