Every summer, when the newspapers give us the reading choices of their great and good contributors and guests, I'm astonished at the height of the brows of everyone who responds. These people are regularly reading works of deep intellectual heft and size. Military histories. Other detailed histories. Serious, difficult novels. Works of sociology and philosophy. Poetry which needs, you'd think, a bit more attention than you can give it from a sun lounger. Or maybe I'm wrong. It's true that my son-in-law was reading MONTCAILLOU (history and small print combined) so I do believe that there are folk who genuinely do this.

I'm of the other persuasion. My holiday involved two long train journeys across Europe so I really needed 'something sensational to read on the train,' in the words of Oscar Wilde. In between, I was spending most of my time beside a pool, so I needed something involving; something that would keep me awake when my eyes were closing in the warmth of the sun. I have to say, I succeeded so well this holiday that I wanted to share my choices with readers of  this blog. 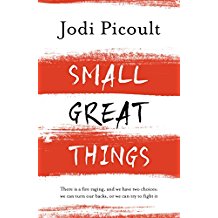 What these books have in common, (apart perhaps from the Sam Bourne TO KILL THE PRESIDENT, to which I'll return), is that they fulfil the best (to my mind)  definition yet of what a good novel is. It's a story about "proper people in interesting situations." Proper people, to be clear, means human beings rather than spacemen or Daleks or any fantasy creation.  Jodi Picoult has dealt in proper people in not only interesting situations but skewered on the horns of some dreadful dilemmas. In SMALL GREAT THINGS, a black nurse is forbidden by a white supremacist father and mother of a newborn baby to touch him in any way. The baby dies. The nurse has tried to help him, of course, but he dies nonetheless. A court case ensues. Every single issue related to race, medical ethics, personal problems is forensically and very grippingly examined and you do end up knowing and understanding much more than you did at the beginning. I raced through it with great enjoyment but by the end I felt two things. Firstly, it was too long. I think if 100 pages had been trimmed away, it would have been a much better book. Secondly, I thought that the additional material added at the end about how the writer came to write the book was a little redundant. But the characters are well-drawn, and the trial unfolds with tension and surprises along the way. We are in the viewpoints of several people: the nurse, the white supremacist, the defence lawyer for the nurse and so on. I do recommend it, especially for anyone who enjoys a good drama largely set in court. 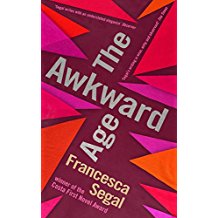 THE AWKWARD AGE by Francesca Segal is related to the Henry James novel with the same title but I can't talk about that, never having read the James.  I downloaded this because I so enjoyed Segal's first novel, THE INNOCENTS. I was very glad that I had. It's a cracker of a novel. A middle- aged couple is deeply in love. The woman is a widow. The man is divorced from his first wife. The man has a son, the woman has a daughter. Of course, the teenagers are appalled by the obvious passion their parents are displaying. They hate one another. And then, they stop hating one another and begin to love one another instead and this causes no end of dreadful problems. Because this book is mostly about people, their failings, their madnesses, their ambitions, and secret desires, I am not going to spoil what plot there is by telling you any more. There is anguish, humour, understanding, reconciliation, jealousy of various kinds and above all, sparkling, witty, sharp and also deeply clever writing. We know everyone; we sympathise with everyone and at the same time want to slap them very hard. It's like spending time with a family which is horrendous in many ways and yet which is at the same time fascinating and attractive and thankfully not yours! I can't imagine anyone not enjoying this book. 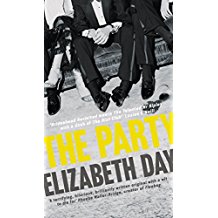 THE PARTY by Elizabeth Day is a very gripping story indeed. It's also about people who in many ways have nothing to recommend them. There are echoes of the Bullingdon Club, and whiffs of resemblances to various people in present day politics. But. But but but...

At the heart of the book are two  character whom we can't help liking, in spite of their many flaws. It's clear from the way the novel is (very beautifully) structured that Something Awful has happened. Martin, the damaged hero, is in a police station. Interspersed with Martin's account of what's happened, and how his whole life has led up to it, comes Lucy, his girlfriend's account of the same story from her point of view. She is writing this account at the behest of a psychiatrist...hmm, you might think and you would be right. The something awful that we're talking about happened at the Party of the title, but there are other awful things that are gradually revealed. I promise you, you will not  be able to put this book down. I raced through it, glued to every sentence. Day is a very elegant writer and even though some of these characters aren't people you'd necessarily want to have next to you on the sun lounger, they are fascinating. Day is a journalist as well as a novelist and this novel is above all, gossipy and in the know....it's terrific.

My final book is a thriller by Sam Bourne who is actually the Guardian writer, Jonathan Freedland. He's a wonderful journalist and often writes articles that are spot on both in style and in substance. I downloaded this because I assume the author knows what he's talking about and  I wanted to see how he'd manage a story about the assassination of someone who bears a very striking resemblance to Donald Trump. All the characters seem to have their equivalents in real life and that was the fascination for me. I have been wondering why no one is suing Sam Bourne but I've   worked it out now. If anyone sues, it's a kind of admission that they know the book is about them. The only possible thing for Trump and his minions to do is to say: "What me, Gov? No resemblance at all..."

All in all, four cracking books for your pleasure. Hope you agree about at least some of them.
Posted by adele at 00:00