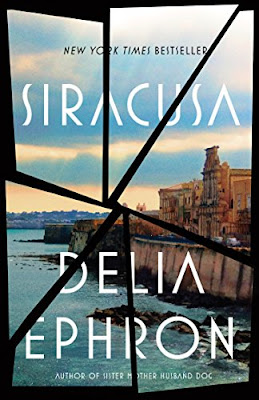 A couple of weeks ago, the Twitter hills were alive with the sound of
readers discussing the relative merits and demerits of reading ebooks.
I'm a fan of the printed book and the printed newspaper, but I
love my Kindle too.

One of the best things about Kindle is: instant gratification. It took me
about 30 seconds to order SIRACUSA after I'd finished reading the
review in the Times. Then I started the novel, and literally took to my
sofa and then to my bed till I'd finished it. I just could not stop
reading, once I'd started. This book is the literary equivalent of a bowl
of salted pistachios.
You can rely on the Ephrons. Nora, who sadly died in 2012, is the
writer of wonderful films (When Harry Met Sally), novels (Heartburn )
and especially essays of unparalleled sense, wit and warmth  (I feel bad
about my neck). Delia is her younger sister and collaborated with her
on movies like 'You've got mail.'

Delia has written several novels and I intend to get to  them all but for
the moment, SIRACUSA is what I'm urging everyone to read. Before
I started writing this piece, I had a look on Amazon to see if others
agreed with me. This was instructive. Even those who loved the novel
were a bit sniffy about the characters. Most people didn't like them.
Fair enough. I wouldn't choose to travel with them myself, but
their faults made them even more interesting.

Our cast of characters is small. Two married couples: Lizzie and
Michael, Finn and Taylor, his wife. Lizzie and Finn were
lovers once. Taylor and Finn are parents to the enigmatic
and strangely creepy Snow (yes!) who is ten. She is pathologically shy
and her mother colludes with her condition in a way that had Amazon
reviewers fuming.

The four adults take turns to tell the story of their trip to Siracusa via
Rome. I won't go into details that will spoil the fun but suffice it to
say that it's not a joyride. We are taken through every detail and
depending on who's talking, the trip is more or less distressing and
worrying. And because so many people these days go on holiday abroad
the troubles of Finn, Michael, Taylor and Lizzie are instantly
recognisable.

When our travellers reach Siracusa, a huge development occurs (again,
no spoilers!) which twists the novel into a completely different shape.
Suddenly, we are in thriller territory but we don't notice it's that until it's
too late, as it were. I stayed up till 2 am to find out what happens. And
it's brilliantly done and written in a coruscating, witty, hilarious and
shrewd prose.

Another thing about Kindles: you can highlight extracts as you go along.
and there's not another novel where I've underlined so much.

This is Lizzie, talking of the time when she was  having an affair with
Finn, who's a chef. She says:
"I knew the affair was temporary. I was on my way to New York City.
Finn was dessert. To take him seriously was to commit to an all-sugar
diet."

If you're going on holiday to Italy or indeed anywhere else, take this
book. I really loved it. And today, as I sat down to write this review,
I opened my paper copy of the Times to find an interview with Delia
herself. Serendipity. I took photos of the photos accompanying the
article and will post them on Twitter as this review goes up. Look at our
Twitter feed, @writersreview1 to find them!