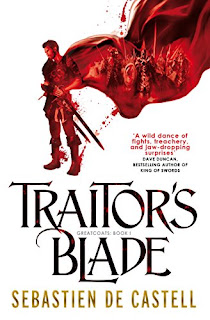 Amanda Craig is the author of six interconnected novels about
contemporary life, including A Vicious Circle and HeRts and Minds.
The seventh, The Lie of the Land, is published June 15 by Little, Brown.

Like many readers, I’m an omnivore; but I have quite specific requirements for different states. When ill, my drug of choice is fantasy – not because it’s always an easier read, but because I want to be taken out of myself and into another universe.
At the start of this year, and thanks largely to London pollution, I had weeks of chronic asthma. What luck, then, to be sent a YA novel, Spellslinger, by Sebastien de Castell, a Canadian author whom I liked so much that I immediately ordered his adult fiction.
Tyrant’s Blade is the first in the Greatcoats quartet, and it’s so good that even if you think you hate fantasy, try it. I’d bet good money you couldn’t put it down after one page. Its hero and narrator is Falcio Val Mond, master swordsman and formerly the King’s First Cantor – a kind of travelling magistrate who gives judgements and restores order to the chaotic land of Tristia. Each magistrate, or Greatcoat, has a special skill in fighting, and each man and woman  is equipped with an extraordinary leather coat, which both protects the wearer from most weapons and hides numerous survival tools. (You will, I promise, long for one yourself.)
The King, the first decent ruler for centuries, is an intellectual and an invalid bent on improving the lives of a people which has been monstrously misruled by previous kings, and the nobility. Falcio saw him as a friend and saviour. Unfortunately, he has also had to kill his King, for reasons which slowly become clear. In consequence, Tristia is once again falling apart. Together with his two best friends Kest and Brasti, Falco has become little more than a mercenary, mocked as traitors and “tattercoats”. Then he gets hired by a rich noblewoman to guard her on the journey to the capital, where treachery, conspiracy and violence await them. There’s a faint chance that something may be salvaged from the ruins, but only if they keep the King’s last gift safe from their enemies.
Clearly inspired by Dumas’s Three Musketeers, these are gorgeously exciting stories with more wisdom about friendship, courage, mercy and truth in them than any Game of Thrones fan could desire. They are definitely not for children (the foul language, and scenes of torture and rape make them unsuitable for under-12s) but they preserve the sense of natural justice which children’s books display, and the female characters are as strong as the male ones.
Several aspects make them special. The first is Falcio himself. His mixture of cockiness, sorrow and determination to do the right thing make him the kind of old-fashioned hero who has been absent from books for too long. He succeeds in protecting the weak from the strong, sometimes and most movingly when he manages to inspire even the cruellest gaoler to letting him go free by singing the Greatcoats’ credo about freedom. His joshing relationship with Kest and Brasti is altogether more earthy and rude, but they each have the other’s backs. De Castell, a former fight manager, imbues the fights in his books with completely credible action and reaction. When Falcio describes how he fights with two blades (or none), you can see it all. For this reason, among many, the Greatcoats series would make compelling TV drama. (HBO, please note!)
The second thing is that the world of Tristia is not obviously magical apart from one thing: Saints are real, and people can (if unfortunate) become one. What seems to be comical invective (“Saint-Laina-who-whores-for-Gods” etc) is a fact of life, and Saints possesses Saint’s Awe, a power to make humans feel whatever strong emotion they embody. This detail, which seems minor in the first book, has by the penultimate novel Saint’s Blood, become something that threatens the whole population.
The third aspect is that this quartet – the fourth, Tyrant’s Throne is out next month – is very funny. Fantasy often contains moments of comedy, but even the best tends towards portentousness. Here, the interweaving of personal disaster and tragedy is there right from the start when the noises Falcio and friends believe to be those of their noble employer having sex turn out to be those of death. Rude, rebellious, indomitable and vulnerable, Falcio is the kind of hero we all wish we could have in our lives. He got me through one of the worst asthma attacks of my life, and I am breathless all over again while waiting for his last adventure.