Guest review by Dianne Hofmeyr: ABOUT GRACE by Anthony Doerr 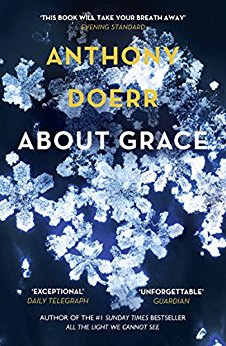 "The most striking aspect of the book is Doerr’s ability - rather like Annie Proulx's - to turn the natural world into a magical, almost mythical place."

Dianne Hofmeyr is the author of many novels for young people. A keen observer of the natural world, she has also written picture books mostly set in Africa. Zeraffa Giraffa, illustrated by Jane Ray, was selected for The Sunday Times Top Hundred Children’s Books in the past ten years and The Magic Bojabi Tree, illustrated by Piet Grobler, is the subject of a piece of music specially composed and played by the Worcestershire Symphony Orchestra. My Daddy is a Silly Monkey, illustrated by Carol Thompson, and The Glassmaker’s Daughter, illustrated by Jane Ray, will be coming out soon.

If grace is an elegance and charm of movement, or of proportion, or of expression, or even the divine power given to man for spiritual rebirth, you will certainly find it in Pulitzer prize-winner Anthony Doerr’s novel, About Grace. And if you were swept away by All the Light you Cannot See, his first novel About Grace will be a fascinating insight into what makes him such a force as a writer. The same moving compassion and intense attention to detail shines though.

It opens with Winkler. Doerr keeps a distance from his protagonist by seldom using the man’s first name, David, so the narrator seemingly becomes a mere observer of events. Winkler is on a plane setting out on a journey to find his daughter. He has run away from his previous life and abandoned both his wife and daughter and has been living on a remote Caribbean island for more than two decades. Why?

Winkler has strange premonitions, or dreams as he calls them – he can clearly see what is about to happen before it happens. He falls in love with his wife in Anchorage, Alaska (clever choice of city as it anchors him to his past) as if it has already been predetermined. They have a child, Grace, but because of his premonitions, he fears the future and what it holds for her. Twenty-five years later he finally has the courage to return to Alaska to discover his daughter’s fate. But the reader is left guessing right until the very end to know whether Winkler’s dream comes true.

The story is both about grace and redemption. Winkler is a flawed character and a reader might be frustrated at his refusal to face his fear of going home. But in abandoning his family, he has committed an unforgivable transgression and Doerr makes him work hard to regain grace, both in the concept of what true grace is and also his daughter, Grace.

The most striking aspect of the book is Doerr’s ability - rather like Annie Proulx's - to turn the natural world into a magical, almost mythical place. Icy cold is never colder than in Doerr’s hands. And the intensity of his landscape both in Alaska and on the tropical island turns landscape into character. Clearly Doerr has been influenced by his ecology teacher mother and everything from the fascinating detail of snowflake formation to the hibernation habits of insects is written about in such a way that one is sensually drawn into the world of David Winkler.

And if you are looking for another dip into the world of Anthony Doerr, try his collection of short stories, The Shell Collector. 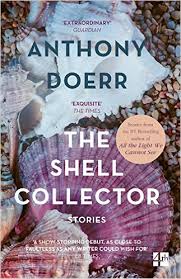