THE DRY by Jane Harper, reviewed by Adèle Geras

Because I often review books by people I know, I sometimes have to start my pieces with a kind of disclaimer. A few words saying that yes, I do know this person but really, honestly, I’d never bother with writing a whole review if I didn’t sincerely believe that the book is a good one and worth drawing to everyone’s attention. If there were acres of coverage for books, and children’s books in particular, maybe I wouldn’t do this, but there isn’t and so I persist in talking about books written by my friends and acquaintances. 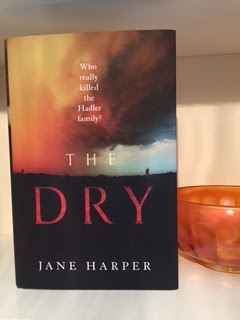 Jane Harper’s case is slightly different. I saw the beautiful cover displayed on Twitter. I love books set in Australia. I love thrillers and this one was getting noticed by the critics and so I cheekily asked for a copy to review. Just before the book arrived through the post, I was tweeted by the author herself who said something like: “I expect you won’t remember me, but I knew you back in the 80s in Manchester.” I remembered her, or rather her mother, at once. We (my daughters and I) used to go on what are known now as playdates at the Harper house, which was only a stone’s throw from where we lived in those days. There followed much exclamation and an email from me to Jane’s mother, renewing our long-ago acquaintance. I was briefly worried about one thing: what if I read the book and hated it? What would I say? I couldn’t review it in such a case.  I was worrying needlessly. The Dry is what is known in proper academic critical language as ‘a corker.’

One of the things I love most about books is their ability to transport you to other places. Writing about place is very important, I think, in conveying to a reader the sense of a world quite unlike their own and in which they are going to live as they progress through the book. The town of Kiewarra has suffered a drought for more than two years. The weather is blisteringly hot and Harper never loses sight of this for a moment. We  know that tempers are short in hot weather, but added to the discomfort here is the knowledge that the town might be doomed. If the drought continues, many people won’t be able to make a living there. What will happen to them? Where would they go? This threat hangs over everything and colours the action.

The plot  ( and I don’t like giving too many details of this for fear of spoilers) concerns the return to Kiewarra  of Aaron Falk,  who grew up in the town,  but who had to leave it under a serious cloud. He’s now a policeman in Melbourne but has returned to attend the funeral of his childhood friend, Luke Hadler, Luke's wife and one of their children. It seems that Luke is the killer in a family annihilation,  but after being drawn reluctantly into the investigation, Aaron is pretty sure that things aren’t as simple as that.

You will think you have guessed what has happened at several points along the way, but you will be wrong. You will think  you know from other novels what goes on when terrible secrets from the past are revealed, but you won’t, not quite. When you do learn the truth, everything will hang together very satisfactorily. Along the way, you will become part of Kiewarra and meet some of its most attractive as well as some of the most horrible inhabitants. I’m predicting that Aaron Falk will be appearing on your screens at some time in the future. Australian tv thrillers are very good and I really hope there's a network waiting to adapt this book.

The writing is very good indeed. Sharp and clear (Harper was a print journalist for many years) but also excels at conveying both landscape and character and catches very well  the cadences of different voices. The dialogue is terrific. The pace never slows, in spite of flashbacks.  The flashbacks are printed in italics, of which I’m not overly fond, but I stopped minding about that editorial decision after a few pages.

This is just the book to read while the weather is chilly in the United Kingdom. Even at a time when you’d think a bit of heat would be welcome, this book makes you feel grateful that you live in a temperate climate.

I’m very much looking forward to reading Jane Harper’s next novel. I never imagined, while she was  building towers from Sticklebricks with my girls, that she’d be writing such a super book, many years later.

Email ThisBlogThis!Share to TwitterShare to FacebookShare to Pinterest
Labels: Adèle Geras. Jane Harper, Australia. Crime, Drought, secrets from the past., The Dry