ON WRITING by Stephen King, reviewed by Linda Newbery 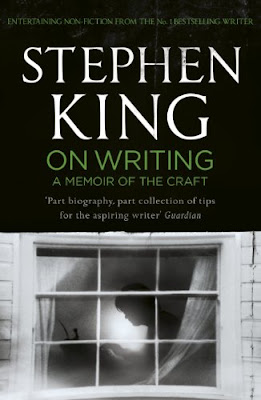 I have to confess that I've yet to read a complete Stephen King novel. Trusted friends have recommended CARRIE, MISERY and others, and after being so impressed by ON WRITING, which I first read a few years ago, I did try MISERY. But ... no. I read only two or three chapters before concluding that Stephen King's fiction just isn't for me. It was gripping, undoubtedly, but perhaps I'm just too much of a wuss for such meaty stuff (and also vegetarian).

This, though, I highly recommend. It's part memoir, framed by King's early days as solitary writer of stories, contributor to a school magazine and journalist - always with a hunger for writing, and tireless energy - and, at the other end of the book, an account of the traumatic accident which he was lucky to survive (he was hit by a truck driver while walking alone on a country road) and his slow recovery, during which resuming the writing of this book was a significant stage.

There is so much to like here, not least Stephen King's devotion to his wife Tabitha (also a writer) and his gratitude for her support throughout his career, especially after the accident. His sales number hundreds of millions, he has published more than 50 novels, won a barrowload of prestigious awards and his current novel END OF WATCH is a New York Times bestseller; yet here he comes over as assured but not conceited, generous with his encouragement, genuine in his desire to pass on the joy he finds in writing.

I've always disliked the nuts-and-bolts approach to writing which suggests that if you follow the rules and work hard you'll end up with a publishable novel. Although King does look at aspects of style and technique, he is clear that writing well is more than that. "At its most basic we are only discussing a learned skill, but do we not agree that sometimes the most basic skills can create things far beyond our expectations? We are talking about tools and carpentry, about words and style ... but as we move along, you'd do well to remember that we are also talking about magic." Yet he's good at debunking ivory tower notions of writerly preciousness, stressing that the most important thing is simply to get on with it. "There is a muse, but he's not going to come fluttering down into your writing room and scatter creative fairy-dust all over your typewriter or computer station."(In a footnote, King explains "Traditionally, the muses were women, but mine's a guy; I'm afraid we'll just have to live with that.") Like many writers, he finds his 'muse' mainly by turning up for work and putting in the hours.

He stresses the need for truth in what you write, dismissing a cynical market-based approach which puts sales and profit ahead of honesty. "It's morally wonky, for one thing - the job of fiction is to find the truth inside the story's web of lies, not to commit intellectual dishonesty in the hunt for the buck. Also, brothers and sisters, it doesn't work." In terms of his own love of the horror genre, "If you disapprove, I can only shrug my shoulders. It's what I have," fed by his early love of horror movies and comics. Interestingly, King is a writer of suspense thrillers who does not give foremost importance to plot: "I lean more heavily on intuition, and have been able to do that because my books tend to be based on situation rather than story."

This isn't a writing textbook and there are no exercises, but there are plenty of examples (good and bad), a section of text which is then revised, with explanations, and one exhilarating what-if masterclass in which King takes a simple, familiar situation as the basis for a story and then plays with expanding it in ways that tighten the tension. It seems that his prodigious output since the publication of Carrie, his first novel, in 1974, has done nothing to dull his enjoyment in writing and creativity. "In the end, it's about enriching the lives of those who will read your work, and enriching your own life, as well. It's about getting up, getting well, and getting over. Getting happy, okay? Getting happy."

Reading this book for a second time, I like Stephen King every bit as much as I did on my first reading. So: should I give his fiction another try? What would you recommend?

This account of The Dead Zone, published in 1979, has a particular, prescient resonance now. King says that his initial idea "called for a dangerously unstable politician ... a fellow who could climb the political ladder by showing the world a jolly, jes'-folks face and charming the voters by refusing to play the game in the usual way." Thinking about his other narrator, King wonders: "Can a political assassin ever be right? And if he is, could you make him the protagonist of the novel? The good guy?"

I might have to read The Dead Zone to find out how it's resolved...