THE YOUNG PRETENDER by Michael Arditti, reviewed by Adèle Geras 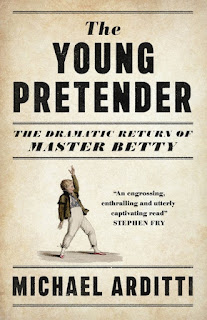 "Sparkling with wit and shot through with sadness: a winning combination."
(Before I begin , I'd like to thank Michael Arditti for sharing these pictures with me. I'm afraid that, probably owing to my own technological incompetence, I was unable to upload all of them straight to this blog, so I photographed some of Michael's images with my phone and what you are seeing is a photo of a photo. Apologies for this....to readers and to Michael, who was very helpful. The cartoon reproduced below is one of many contemporary cartoons, but Michael owns a copy of the one shown here. I hope that the layers of unreality might add to the theatrical tone of this piece. )

The Young Pretender: the dramatic return of Master Betty was published on April 28th, and has had a very good critical reception. All the reviews I've seen have been enthusiastic. This review was originally published on the History Girls blog but I'm posting it again here for Writers Review readers.

Michael Arditti has an interesting and varied backlist. I've reviewed another of his books on this blog. It's called Widows and Orphans and it's wonderful. It is also as different from The Young Pretender as you can imagine. It's the story of a man trying to rescue his local paper from being taken over and is also a novel about domestic dilemmas and personal lives. Arditti has also written two Biblical epics (Of Men and Angels and The Anointed) and I have read both. They're enormously erudite and very long so I recommend reading them on a Kindle, but I do recommend them. Michael Arditti is a brilliant writer. He is also a critic and is clearly enthralled by both the reality and the illusion of the theatre.

In the Acknowledgements, Arditti says: 'In writing The Young Pretender I have adhered to what is known of Betty's life, while freely filling in the extensive gaps.'

The method he's adopted to write about Master Betty is to adopt his voice. Indeed, he may be said to have become Betty, because every word seems so genuine, so heartfelt and so accurate that it's easy to imagine that this is a memoir by the actor. As a child star he was also known as The Young Roscius. He played Hamlet (and many other rôles) at a very young age and then fell out of favour. In 1806, Master Betty (now to be called Mister Betty, as he has to tell everyone he meets) returns to Bath, six years after his last starry appearance. "I am six years older now, ten inches taller.....Should my name spark a recollection,; my figure swiftly dispels it..." 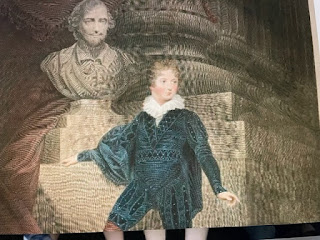 We learn along the way about Betty's family, and his rise to fame. We see details of the huge acclaim that greeted his every appearance. William Pitt, the Prime Minister, came to see him perform and Betty was the toast of the town in every way. I make a point of providing no spoilers so I won't say more about the plot, but there is one, even in a book as short as this and which is so carefully based on the historical record. 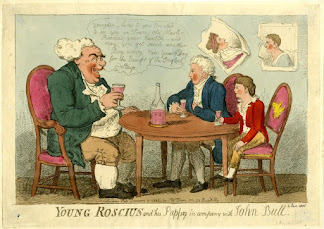 Arditti's huge achievement is tuning in to the authentic voice of his protagonist, narrator and star. I am completely convinced that this is exactly how Betty spoke and how he would write. In the days when I used to visit schools, I sometimes told the children that writing novels was like having a huge dressing-up box at my disposal and that I was allowed to put on the costumes and pretend to be whatever I felt like being: a fat black cat or a retired ballerina or....anyone at all. Arditti has clearly enjoyed inhabiting the 18th century and he is fluent in its language and preoccupations.

It's also instructive to read about how our forefathers dealt with the matter of celebrity in the days long before Twitter and the rest of the social media we have to grapple with. Trolling, and cancelling and gaslighting etc have been part of our lives for a long time. Britney Spears would recognise much that befalls Betty and the way that audiences can consume their idols happens today as it did then. The young are vulnerable. Control is always there: eat this, don't eat that, see this person, don't see that person....some of the ways in which Betty was treated recall what we know of the childhood of Frances Gumm, who became Judy Garland. If you're a vessel for the dreams of many people, it's hard to be yourself.

Another thing I found interesting was the level of detail about the actual running of the theatres in the Georgian period. Actors had 'circuits'. Actor managers were the ones who arranged tours. Rehearsals were often negotiable. You met the other actors at the first rehearsal. Stage business was fixed on before you began: where you'd stand and how you'd move once on the stage and so forth. Then the words came in later. I learned, for example that at this time, what I used to call 'flats' when I was on the stage were called 'flat -scenes': literally flat pieces of wood and canvas which were pushed into place to depict the background. I enjoyed seeing what hasn't changed since those days as well as what has.

I hope very much that readers of this blog will try this most unusual short novel. It's both sparkling with wit and shot through with sadness: a winning combination. 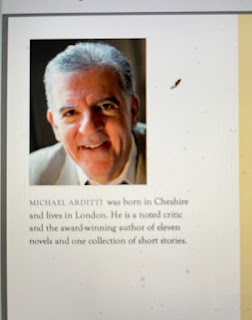 The Young Pretender is published by Arcadia Books.