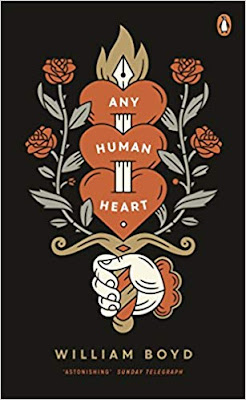 "What a read it is! I feel as if I'm tottering out of a cave, blinking in the daylight, after a long and intense journey..."


(This review first appeared on A Fool on a Hill.)

Have just finished this, and what a read it is! I feel as if I'm tottering out of a cave, blinking in the daylight, after a long and intense journey through a goodly portion of the twentieth century, during which I've met Virginia Woolf, Picasso, James Joyce, Hemingway, the Duke of Windsor and heaven knows who else, experienced the Spanish Civil War, been a spy in the Second World War, witnessed the civil war in Nigeria and been a slightly baffled hanger-on of the Baader Meinhof Gang.

The story is told through the character of Logan Mountstuart, and purports to be a collection of his journals, with occasional additional notes from an anonymous editor. Born in 1906, Mountstuart's early childhood is spent in Uruguay, where his father runs a meat processing factory: his mother is Uruguayan. When he's eight, his father has a promotion and they move to England, to Birmingham. Logan is sent to boarding school, and begins his first journal when he's seventeen. Friends he meets there recur throughout the book.

At this stage, Logan seems pretty bumptious - a vivid character, but not necessarily a likeable one. And that's a feature of him: all through his life, he does things he should probably be ashamed of - as we all do - and sometimes you find yourself feeling really cross with him. But then you catch him out in an unexpected act of kindness and you think, oh, well, he's not so bad after all. Which can happen with real people, but not so much with characters in books, who are generally expected to be consistent. So he sleeps with his best friend's wife, Gloria, quite carelessly - but years later, when she's impoverished and dying, he takes her in and cares for her, even though by this stage he's extremely poor himself. He drifts into his first marriage carelessly and is unkind to his wife - but his relationship with his second wife is deep and lovely. The title of the novel comes from a quotation from Henry James, Never say you know the last word about any human heart: and clearly, the human heart, its complexity, its shallowness and its depths, is one of the things Boyd is exploring in this book

Boyd puts his character right in the middle of so many significant places and situations in the 20th century. And he does it so skilfully that it all seems entirely plausible - even, just about, his involvement with the Baader-Meinhof gang, which begins when he finds a leaflet in a phone box asking for volunteers to join a group interested in social justice - just when he's looking for a new purpose in life in old age. He proves to be rather good at selling the group's newspapers, and becomes more and more involved, eventually finding himself smuggling gelignite in Europe - at which point he finds himself bemused but not disconcerted, and yet again extricates himself from what seems an impossible situation.

I found it a remarkable book - one of the best I've read in a long while.

Any Human Heart is published by Penguin.

BlogThis!Share to TwitterShare to FacebookShare to Pinterest
Posted by Linda Newbery at 00:00