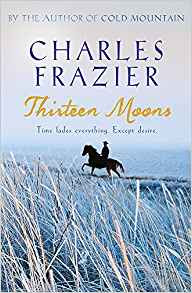 "So lyrically written that I was quite bereft when I got to the end..."

First published in 2001 for children, Cindy Jefferies found success with her Fame School series with Usborne Books. They obtained 19 foreign rights deals and are still in print in the UK. Latterly writing fiction for adults as Cynthia Jefferies, her first title The Outrageous Fortune of Abel Morgan was published in November 2018. It comes out in paperback in August 2019. At present she is working on another title for adults.


Charles Frazier’s first book, Cold Mountain, was a best seller on both sides of the Atlantic. His second, Thirteen Moons, came nine years later, and it shows. I have enormous respect for writers who take their time against exhortations by publishers, booksellers and readers. A novel takes its own time, or it should, but everyone needs to make a living, and that can work against our best endeavours. I have no idea precisely why Thirteen Moons took nine years, but I like to think that at least one of the reasons might be because he refused to be rushed.

The title refers to the way the First Nations people in the novel trace their seasons. Frazier educates us as to where we are in the year by way of these thirteen named moons. They quietly pace his novel, the life story of Will Cooper told in the first person. He is a bound boy at the start, a twelve year old orphan, sent alone to the edge of the Cherokee Nation to run a trading post.

For anyone who loves to read of the natural world this is a delight, and also a sadness, especially now, as we appreciate just how much damage we continue to do to the world.

In this wonderful novel we get vivid images of how people think about the land and its inhabitants. The buffalo and elk for example are long gone from the mountains and valleys, and the deer are far fewer, but none of the Cherokee in this novel speak of the numbers of skins they traded being a reason for the animals' demise, just of their vanishment, as if they have simply moved on. That made me think a lot about the balance of nature, and how outside forces offering manufactured goods to make life easier can make change almost impossible to resist.

The Cherokee are a huge influence on Will Cooper, and as a white man he works hard in many ways to protect their land and their way of life. The fate of the First Nations is a matter of history, and shame, and so of course he does not have a quiet life, but even during the worst of times, when violence comes, his story is told reflectively, in the voice of an old man thinking about the past. That voice is so persuasive I could almost believe I was sitting by the fire, listening to him in person.

I was completely captivated by Will Cooper. His loves, his behaviour good and bad, his humour, and wonderful descriptions of riding through the country in good weather and bad. He describes deep snow, thrashing rainstorms and hot sun. The names of places are wonderful, and the way the flora and fauna were used to support life is fascinating. In addition, it is all so lyrically written that I was quite bereft when I got to the end.

Thirteen Moons is published by Sceptre.