Guest review by Hilary McKay: FRÄULEIN SCHMIDT AND MR ANSTRUTHER (Being the Letters of an Independent Woman), by Elizabeth von Arnim 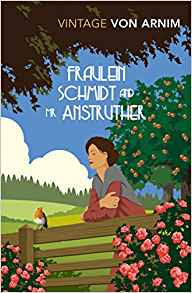 "There is so much in this book to love, so many instant character sketches, so many turns of phrase, so many moments of clear sight, and jokes, and triumphs."

I grew up in Boston, Lincolnshire, the eldest of four sisters in a very small house. My entire family read books like starving wolves eat their dinners, reading was my first great escape. The second was St Andrew's University. After a variety of jobs I settled down in Derbyshire to write books, which has just about kept the show on the bumpy road these last twenty-five years or so.


Every few months, when the books in my home are heaped too high, horizontal above the vertical in the bookcases, sprawled across too many tables, at avalanching point on my desk, I have a cull. A horrible cull. I have to be in a bad-tempered, planet-saving, if-I-don’t-do-this-who-will mood to manage it, but it happens.

A year or two ago, Fräulein Schmidt was one of the victims. It was time. Her glue no longer held her together: her pages were yellow, and even worse, loose. She was quietly biodegrading, the tattiest of all my tatty green covered Viragos, and so off she went, too shabby for a charity shop, straight into paper recycling with the cereal boxes and bills.

I lasted about six months without her, before I went out and tracked down a replacement.

I would like  Fräulein Schmidt to live next door to me and come round often and borrow my books and lend me hers, and make me laugh and gather up my courage on dark days and rush outside with her on bright ones to appreciate the lovely, ludicrous, luminous corner of the planet in which we find ourselves planted. She is a heroine with a talent for friendship, she is one of those people you find in books who instantly make you feel better without making you feel needy. She is, if you ask me, but no one ever does, because it is one of the books I have never been able to get another soul to read, the very best of Elizabeth von Arnim.

Fräulein Schmidt is Rose-Marie, aged 25 at the start of the book, which is an epistolatory novel, all the letters being from Rose-Marie to the eponymous Mr Anstruther. Rose-Marie lives in a small, dull German town named Jena. Her mother is dead, her step-mother is dour and sour, her father is a professor and he suits Rose-Marie very well. He has a twinkle and a very nice way with words, and they love each other, but he does pipe on, as she says herself, rather too much about Goethe. And he never seems to earn anything in the way of money. Therefore, to make ends meet, the family take in rich English students who wish to learn German. Mr Anstruther is one of them, and one Tuesday night, at end of his year in Jena, Mr Anstruther kisses Rose-Marie.

Or perhaps, why not? Reading between the lines (and in this book at least half of the story is between the lines) Rose-Marie is certainly as worthy as any Cinderella of meeting Prince Charming and going home to the castle, it could be a fairy tale…

One of Rose-Marie’s many qualities is her honesty. Her wit, intelligence, courage, resourcefulness and common decency are all based on her honesty. It is the rock which upon she stands in order to view her world. And so she writes to Roger, who is also Mr Anstruther, but Roger for the time being:

‘Do you know I’m poor? Of course you do. You couldn’t live with us for a year, and not see by the very sort of puddings we have that we are poor.’

She is anxious to have this understood, that she, Rose-Marie, loves him but is poor, and can bring no money to the marriage he has so rashly proposed. But perhaps it doesn’t matter, it certainly doesn’t to Rose-Marie, and of course it must not to Roger. After all, does she not remember, very clearly, what was said:

‘…the words rained down on me on Tuesday night between all those kisses… Roger, did I hear wrong, or were they not “Lovely-lovely-lovely” ? And always kisses between…’

We have to believe, given Rose-Marie’s honesty, that she didn’t hear wrong. This is the unexaggerated truth. She heard it, and for a few breathless chapters, she believed it.

It isn’t a fairy tale, or if it is, at this point it ends and real life begins. The sudden long silences from England, the Anstruther family expectations, the arrival in Roger’s life of a proper English Miss Cheriton. And more Rose-Marie courage:

‘I agree to everything. You must do what your father has set his heart on, since quite clearly your heart is set on the same thing. All the careful words in the world cannot hide that from me. And they shall not. Do you think I dare not look death in the face? I am just the girl you kissed once behind a door…’

Illness follows, and the further disasters, and suddenly Rose-Marie is no longer in Jena, but half way up a mountain, a good long walk out of town, with no one but her father and Joanna, their rambunctious maid, for company, and nothing but her own resources to save her from despair.

This is where the story really takes off.

Rose-Marie is a survivor, her resources are phenomenal, she has no interest in self pity, her goal is happiness for herself and those she loves, and by way of potato planting and neighbours and bean fields and books and much hard work she sets out to find it. In between she is still writing her letters to Roger (who has become Mr Anstruther again). She writes at first to prove that he has not flattened her, that she is still standing, so to speak. And because she believes, despite their different worlds, that in some way they can help each other and be friends. He writes because he is the sort of man who cannot quite let go. He’s dumped her for his English miss, but he not comfortable with himself. He wants Rose-Marie to soothe his conscience and understand him. He wishes very much to be understood, even when Rose-Marie writes: ‘I’m sorry you think me unsympathetic. Hard, I think was the word, but unsympathetic sounds prettier.’

She does sympathise, but not always, and not very much. He is so ludicrously privileged and so ridiculously sorry for himself. He cannot resist pronouncing on her world. Joanna’s wages, for instance, shock him completely. The amount Joanna earns in a year, he says, wouldn’t keep him in gloves and ties for a month.

‘There must be,’ writes Rose-Marie very plainly in return, ‘stacks of gloves and ties constantly growing higher in your path.’

Nevertheless, he can be well meaning, clumsily sometimes, but trying as best as he can. After her step mother dies, for instance, she says, ‘Your letters since you knew have been kindness itself,' and he is distressed to think she has so little money, more distressed than Rose-Marie, who is not grateful at all for his pity, remarking: ‘There is always a secret satisfaction in the soul of him who pities. He does hug himself…’

And she tells him about her new resolve to become vegetarian, which is not without difficulties:

‘For dinner, by which time I am curiously shakey,' she writes, 'we have salad and potatoes and fruit and lentils because they are so good for us (it is a pity they are also so nasty)...’

Vegetarianism is not something Mr Anstruther can approve of either, nor is Rose-Marie’s enjoyment of a neighbour's son, playing exquisitely on a violin. He enquires as to whether any other lodger has replaced him. He seems to be worrying a lot, unlike Rose-Marie who writes: 'The future looks quite pleasant to me- quite bright and sunny. It is only empty of what people call prospects, by which I take them to mean husbands, but I shall fill it with pigs instead.'

Which does not console him at all.

This book delights me. It comforts me over and over. I like so much the humanity and courage and brains of Rose-Marie (who between all her other endeavours is busily writing a book, and making a very good job of it). I love how she make friends with little Vicki, who arrives to live next door with a broken heart and is brilliantly engineered into happiness. I admire her warmth. I especially pleased to see the unworthy Mr Anstruther finally brought to his expensively tailored knees. There is so much in this book to love, so many instant character sketches, so many turns of phrase, so many moments of clear sight, and jokes, and triumphs.

Then, finally… But you must read it and decide for yourself. There is a point where the letters stop and become single sentences, and an ending which one reviewer claimed "would send hordes of young men travelling as fast as they could towards Jena.’

Well, as Rose-Marie so often remarked herself, perhaps…

Fräulein Schmidt and Mr Anstruther is published by Virago. 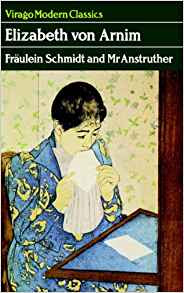