DO NOT SAY WE HAVE NOTHING by Madeleine Thien, reviewed by Linda Newbery 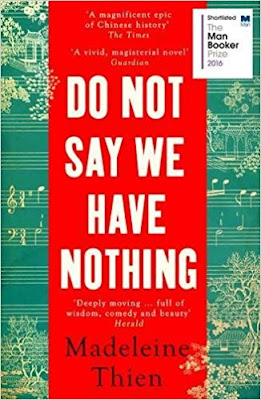 Three weeks ago we featured Sheena Wilkinson's review of The Dark Circle, by Linda Grant, which is currently shortlisted for the Baileys Women's Prize for Fiction. Here's another strong contender.

Like Rohinton Mistry’s A Fine Balance, Boris Pasternak’s Dr Zhivago or Jung Chang’s Wild Swans, Madeleine Thien's novel takes the reader through a harrowing time of political upheaval in which individuals struggle to keep any sense of purpose and integrity. The story here revolves around three exceptional musicians at the Shanghai Conservatory of Music: Sparrow, his young cousin Zhuli, and a pianist, Jiang Kai. The novel opens in Canada with the first-person narrative of Jiang Kai’s daughter, Li-ling or Marie, from whom we learn that her father killed himself in 1989.

The circumstances of this are slowly revealed, taking us back, through three generations of linked characters, to communist China under Chairman Mao, the Great Leap Forward, the Cultural Revolution and the rule of Deng Xiaoping – leading, with a sense of inevitability, to the Tiananmen Square protests. This sounds grim, even daunting, but we approach obliquely through various intertwining stories, linked by music, especially Bach’s Goldberg Variations and by Sparrow’s own composition, and by chapters from a fragmented book, part fiction, part reality, which is copied, preserved, and passed from one character to another. These writings first appears in notebooks given by Wen the Dreamer to his future wife Swirl: “As her candle flickered, she became certain that the writer had gone into exile or perhaps met with some tragedy”. Or maybe “the names were part of a code, a trail that someone could follow.” As readers, following this trail back and forth through the generations, we begin to see patterns: love and loss, loyalty and rebellion, exile and survival, music and silence.

Both writing and composing were of course highly dangerous in a culture in which nothing could be private, and where attitudes, tastes and even thoughts were expected to conform to narrow party lines. Sparrow’s own Symphony No.2, “which he knew to be a work of great beauty, languished in his desk drawer, having never even been submitted for approval … His students wanted revolutionary accessibility and his superiors tried to educate him on the correct political line, but what line could this be? As soon as he contained it in his hands, it opened its wings and filled the sky.” Western music, especially, is seen as bourgeois and contaminating, and soon Zhuli, a violin student devoted to Bach and Prokofiev, is targeted, denounced and assaulted by zealous Red Guards. Tellingly, Sparrow gives up his music to work in a factory making radios: radios which blast out Party propaganda from every open window. He feels that “the weakness of his time had lodged inside him, slowly pulverising all that was unique and his alone, because he had allowed it to do so.” Even to love is to risk Party disapproval: “Love, if it served the smaller self before the greater one, the individual before the People, was a betrayal of revolutionary ideals, of love itself.”

In spite of the weighty and tragic events recounted, there’s often a beguiling innocence to the writing, as in this charming glimpse. “Swirl heard an infant weeping, went to the window and when she looked down, she saw a couple trying to fit their baby into his winter coat, adjusting arms then legs then head as the baby lolled and weakly fought, then scrunched up his face and wailed, and still the outerwear refused to fasten. Wen the Dreamer came along the avenue, a block of pages sticking out of his pocket. He leaned towards the weeping child like a comma in a line so that, momentarily, the child, confused, suspended his wailing, the outerwear was fastened, and the little family went on their tremulous way.”

The story is framed by the arrival in Vancouver of Ai-ming, Sparrow’s daughter, who has fled China after the Tiananmen Square massacre. Marie and Ai-ming form a close bond echoing that of their fathers; but Ai-ming, attempting to take up residency in the United States, disappears again, mourned by Marie. “Long after she departed, Ai-ming’s voice tugged away at my thoughts, returning me again and again to the same ever-expanding, ever-contracting piece of music … It’s taken me years to begin searching, to realise that days are not linear, that time does not simply move forward but spirals closer and closer to a shifting centre.” The Book of Records is fragmented and unfinished, but copied and disseminated. Sparrow’s music is concealed but eventually rescued, recorded and distributed. Marie / Li Ling continues to piece together her past and that of her family. In this way the characters, their dreams and aspirations, live on.

Reaching the end of this memorable and rewarding novel, I felt that I needed to start again at the beginning, and in retrospect I should have made notes, to understand more quickly how the characters are connected. (A friend to whom I passed on the book also stopped halfway to start again, for clarity - it does demand some initial effort from the reader). As I was about to leave for two weeks in China, it sent me back to Wild Swans, which covers the same period in memoir form and kept me absorbed throughout my trip. I learned that although Wild Swans is translated into 38 languages it is still banned in China; that most Chinese people are unaware of the events in and around Tiananmen Square in 1989, and that Madeleine Thien has been told that her novel can be published there only if the chapters about the protests are removed - reminders that China, though embracing Western influences in many ways, is still under tight control.


Do Not Say We Have Nothing is published by Granta.
Posted by Linda Newbery at 00:00