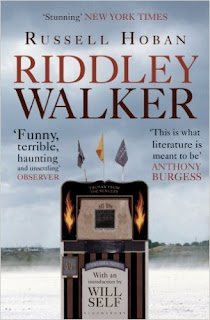 "I opened Riddley Walker and almost closed it straight away. But I persisted because I was a Hoban fan ... "

(This post first appeared on The History Girls blog)

Bloomsbury are to be congratulated on keeping in print one of Hoban's most interesting books: Riddley Walker. This edition, from 2012, has a good introduction by Will Self and glancing through the many enthusiastic reviews on Amazon, I can see that it's mainly the science fiction fans and fantasy buffs who love it. I read it, as I say, long ago and in 1986, I saw a production of it at Manchester's Royal Exchange Theatre with David Threlfall as Riddley which was completely brilliant. It seemed then to be the kind of book which could never be adapted, but I suspect that nowadays, people are more likely to have seen Riddley Walker as a play. 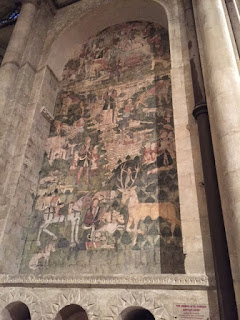 On a visit to Canterbury Cathedral I saw this painting of St Eustace (whose legend is a very strange tale indeed) and that reminded me of Hoban's amazing novel. 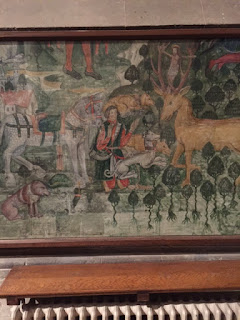 Here is a detail of the painting above. I thought at once of Riddley Walker because the novel is deeply connected with the story of St Eustace. 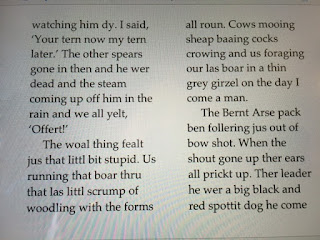 Here is a page from the book, taken at random. When I saw this weird hybrid language, my heart sank. I'd known Hoban as the author of such novels as Turtle Diary and Kleinzeit. The latter was odd but marvellous and though it was surreal, I managed to read it with no difficulty and loved it. It was written in English, which was a great plus as far as I was concerned.

I must admit straight away that I am not a fantasy or science fiction fan. I do not like books about what happens after nuclear apocalypses. In general, I don't like books I have to decipher. I opened Riddley Walker and almost closed it straight away. But I persisted because I was a Hoban fan and I felt that there must be something there. Plus, of course, it was being reviewed and fêted all over the place, back in the day and when I was young, I liked being up to speed with what was new. I'm much less of a follower of fashion now that I'm older. So I deciphered the first page. Then I deciphered the second and on and on I went, drawn into Riddley's strange language, and his even stranger world. After a few pages, I was reading Riddley's tale with ease.

How to describe this book? How to persuade new readers to try it? It's a bit like The Road, by Cormac McCarthy in that it's post-Apocalyptic. It's set in a world which is very different from ours but in which certain things from our world (Punch and Judy shows, most importantly) have acquired a significance we never gave them. It's set in what is recognisably Kent (there's even a map in the front of the novel) and the Cathedral and St Eustace and his legend are of great importance. It's a book that's very hard to describe and it's not one that everyone will like, but it's full of humour and some of the sayings like "TRUBBA NOT" (don't worry) have become part of my personal vocabulary. I also like PRY MINCER for Prime Minister. It's a book which a certain kind of teenager would adore, and did adore when it first appeared. I've written this post in order to draw some attention to it so that hopefully a whole new audience can share Riddley's adventures. And if anyone else out there is a fan, I'd be very happy to read your opinion of this dazzling novel in the comments.
Posted by adele at 08:53